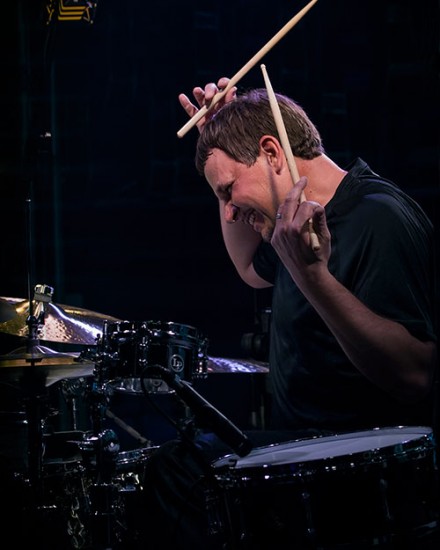 Keith Carlock is a drummer who has recorded and/or toured with such musical luminaries as Steely Dan, John Mayer, Sting, James Taylor, Toto, Christopher Cross, Donald Fagen, Walter Becker, Diana Ross, Faith Hill, The Blues Brothers, Wayne Krantz, Mike Stern, Robben Ford, Bill Evans, Leni Stern, David Johansen, Richard Bona, Chris Botti, Rudder, Harry Belafonte, Oz Noy, Larry Carlton, Clay Aiken, Rascal Flatts, Paula Abdul, Eros Ramazzotti, Bootsy Collins, Michael Buble’, and Grover Washington, Jr, to name only a few.
Keith has been the drummer with iconic jazz-rock band Steely Dan for over 20 years. He has performed on every tour since 2003 and his first recording with them, “Two Against Nature” won the Grammy award for “Album Of The Year” in 2001.
Keith was honored to be voted the winner in the Pop, Fusion, and Best All-Around categories in Modern Drummer’s 2009 Readers Poll. He was also voted the winner in the Jazz category in 2010, and the Pop category in 2008.

Within one bar of the groove, I can tell it’s Keith. There’s nobody out there who sounds like him.

When Keith plays he’s not mathematical. He’s very spiritual. He’s as advanced technically as anyone I’ve ever played with, but his technique always serves the music.